Renown United has an impressive history. Renown the club, was formed in 1952, and has churned out a production line of talented players and has been a tremendous “feeder” outlet for St George, and now St George-Illawarra. Reg Gasnier, Billy Smith, Johnny Greaves, Ross Strudwick, Mark Gasnier and Jason Nightingale are names synonymous with having reached the highest pinnacle of the great code of Rugby League. All six played for St George then went on to play for their country, but apart from this they all have one common dominator. They began their Rugby League careers in one of the most famous footballing nurseries in the code – The Renown United Junior Rugby League Football Club.

During the 1950’s and 1960’s, the St George Junior club was churning out first graders with monotonous regularity. Carlo Steele was the first player from Renown to be graded. This was with St George third grade in 1957. St George third grade won the premiership that year against Balmain. Popeye Lofts was also graded this same season and he had an interesting year in that his total match payments did not exceed the 3-pound deduction (standard for the time) for socks and coloured photo. Popeye therefore ended up owing St George money.

As the Dragons won premiership after premiership in those early years and supplied and endless stream of internationals, so Renown United dominated the junior competition.

Renown was formed with the amalgamation of the Penshurst Dragons and the Oatley Sports Club. They borrowed the name from Renown Park in Mortdale where they later trained, but due to a council ruling were unable to play. Training days weren’t all that pleasant as next to the park was a rubbish tip, and most times it was burning. On several occasions the Fire Brigade was called, in fear of the park going up in flames.

Renown United began in a humble way indeed, fielding only four teams – A, B, C and D Grades, with their Guernseys bought on time payment by the club president Harry Brierly and secretary Keith Papworth. Among the many local identities to turn out for the initial A graders were ‘Dasher’ Brierly, Sid Rawlings, Ken Prentice and ‘Fatty’ Rowlands. Len Cox, Keith Rugless and Larry Lamond and many other outstanding footballers joined Renown in 1955, the year after the first D grade premiership. Another, Ray Cox made his comeback with the green and whites 16 years later. There weren’t too many spring chickens among these early players. In fact most were closer to 40, however what they lacked in tender years they made up for in colour and character.

Many anecdotes they evoked are still chuckled about over a beer in St George pubs. One such story concerns a character known only as ‘Rakker’ – a pretty handy winger for his day. One day during a match ‘Rakker” split the opposition defence and set sail for the line, and with no one to beat, a try seemed evident. That was until someone in the crowd yelled out “Have a Go Rakker”. With this, the flanker stopped just short of the line, steadied himself and proceeded to pot a field goal. This brought a loud groan from the stunned crowd, not because he had sacrificed a certain try but because he somehow managed to miss the goal as well.

Through this type of ‘enterprise’ it was easy to see why Renown didn’t take out a title in those first two years. In 1954 the fledgling club drew first blood when their D Grade won the competition – mainly on the strength of the effort put in by a raw 16-year-old five-eight named Reg Gasnier. Renown’s 20-year president, Darryl Mallard had high praise for young Gasnier. “He had bewildering pace and beautiful hands. It was evident he was going to be a champion”. In 1958 Billy Smith helped Renown E Grade to another competition win, and three years later he was called into grade with St George. But only just as Smith recalled “When I got called up to grade I didn’t want to go because I was enjoying it so much with Renown”.

After the purple patch of the 1950’s and 60’s, when they took out 19 competition titles, the great club had a downturn. By 1969 they were fielding only one grade.

The 1970’s saw a huge recovery and Renown had a most successful decade contesting five A Grade grand finals, winning three. The first was in 1970 when coached by Life Member Jim McGuire. Kevin Greig was the successful coach in 1973 and in 1975 it was Ross Byrne. Jim McGuire also played in all these winning sides, including our first ever A Grade competition in 1968. During this period our B and C grades sides also contested five grand finals between them winning two in 1970 and 1971.

In 1976 former president Darryl Mallard, and then president Jim McGuire devised a plan to grow and develop the club. Coaches were sought and players from many local schools were recruited in an effort to get a junior development program off the ground. Arguably the most significant point in our history was when Mortdale R.S.L. approached John Gasnier with a request to take over the running of their junior teams. Before this Renown was fielding four senior sides in A, B, C, and D grade. The other feeder club at this time to Renown was Oatley RSL who had Rugby League as a sport in their Youth Club. Les Napier and Jack Sullivan were mighty ambassadors for our club and would promote the boys up to Renown for their senior football.

Suddenly Renown had become a fully-fledged club with Juniors and Seniors and went from four sides to fielding U/7’s to U/13’s plus A, B, C and D grades. This gave young players the opportunity to play all their junior and senior football with one club. The first player to achieve this was a young man by the name of John Irvine who played from U/7’s to A grade in 1991.To commemorate this event a trophy was struck in his honour and it became “The John Irvine Award”. This was an outstanding achievement for John, with only three other players up to 2001 achieving this feat. These are Life Member’s Scott Armstrong and Jamie Tricker who are both currently playing A Grade and Clayton Camby.

As in the 70’s Renown United proved very successful in the 80’s winning ten competitions and three senior club championships. In 1981 Renown finally achieved a junior title when Pryce Alsop coached the U/7’s to victory. Further success continued when Life Member Col Tricker coached the U/11’s in 1982, U/12’s in 1983 and the U/13’s in 1984 to grand final wins.

In 1983 Greg Woods coached the C grade to win the competition. It is interesting to note that in 2001 Greg has dusted off his coaching manual and is our current C grade coach. Players to have reached higher levels in Rugby League from that winning side were Steve Funnel and Scott Freestone.

In 1985 we again attained success when old stalwarts of Renown Dean Mallard, Sean Fitzpatrick and Robin Forster coached our U/10’s to victory.

Renown won their first A Grade Premiership in 12 years when Greg Burns coached them to success over Kingsgrove Colts. It is important to remember that Renown had four players from their starting team sent off in the final against Kyeemagh. That year Chris Quinlan also coached our U/13’s to win the grand final.

1988 saw Life Member Greg Fehrenback finally achieve a grand final win after eight attempts in the B Grade competition. Another Life Member Denis Green had to endure an extra 10 minutes each way to narrowly defeat Penshurst RSL 10-6 in the 1988 U/17’s grand final thriller. Penshurst RSL were undefeated up till this game.

1988 was when Life Member Bev Armstrong began her long reign as Secretary and in the 1990’s fellow Life Member Roger Riley, joined her as President and together they guided the club to be dominant throughout the decade. Roger is a past St George Junior League president and he played with the club for nine years after which he managed. Roger and Bev’s plans reached fruition in 1992 when Renown won four premierships, U/7, U/16, C Grade and A Grade.

The first competition win in 1990 was when Jack Power coached our U/9’s to victory. A young player named Mark Gasnier was in that side. Another milestone came in 1991 and 1992 when Life Member Col Tricker coached our first ever back-to-back A Grade premiers. The U/8’s coached by Life Member Scott Armstrong and the U/10’s coached by Ron Bennett were victorious in their respective competitions in 1991.

In 1992 along with the A grade, Renown were champions in the U/7’s coached by Dave Evans, U/16’s coached by Mark Barker, and C Grade coached by Life Member Jim McGuire. That year, in a feat unparalleled by this famous club Renown competed in no less than seven grand finals.

In 1997 a fellow by the name of Mick Williams took over the reigns as A Grade coach. During his time as coach, Mick has set high standards for his side. His record shows a grand final appearance in 1997 and Premiers in 1998 beating Arncliffe Scots. This was the year that veteran and Life Member Ted Palumberi finally called it quits after some twenty years playing A Grade. The A grade again took the prize in 2000 under Mick and in 2001 were minor premiers and first to the grand final.

Long time players Matt Riley, Con Avgeris, Stuart Clift, Jamie Tricker and Scott Armstrong with the introduction of junior players coming through our system have ensure Renown United will be strong and competitive for many years to come.

Another outstanding performance and trophy in 2000 came from our mighty U/9’s coached by former A grade winning premier player Sean Giles.

This insight to our club’s history has been all about achievements. In all the victories there is always a story to be told about the one we should have won. Lets hope all these memories are not diminished and are still told in the years to come.

Acknowledgment must go to all our past and present players, committees, coaches, managers and trainers, without this support our wonderful club would not be celebrating our fabulous history. 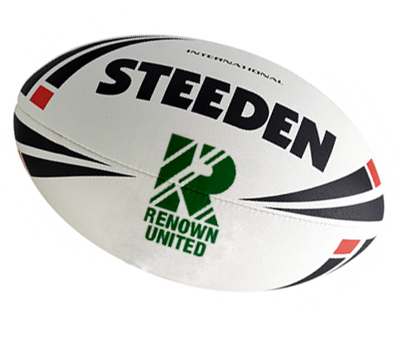